What is Workplace Bullying? 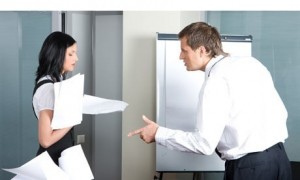 According to the Industrial Relations Act 1990, “Workplace Bullying is repeated inappropriate behaviour, direct or indirect, whether verbal, physical or otherwise, conducted by one or more persons against another or others, at the place of work and/or in the course of employment, which could reasonably be regarded as undermining the individual’s right to dignity at work. An isolated incident of the behaviour described in this definition may be an affront to dignity at work but, as a once off incident, is not considered to be bullying.”

This type of bullying is often triggered by a work-related conflict and can happen in any type of workplace, from offices to workshops, including voluntary, casual and military positions.

Exclusion by an individual or group can manifest itself in a deliberate intent not to invite someone to an important meeting, to send a copy of an important memo, to leave them out of work in progress, to deliberately pass them over for promotion, or fail to give the information or resources necessary to complete an assigned task. Another tactic is to give the target impossible workloads with unrealistic deadlines, in an attempt to set them up to fail in the hope that they will feel invalidated and worthless. Read about the other types of workplace bullying.

For the most part, bullying behaviours take place behind closed doors in the absence of witnesses. During the early phases of bullying, the victim is subjected to aggressive behaviours that are difficult to pinpoint by being very indirect and subtle and he/she is gradually worn down over a period of time. It is often very difficult for the victim to gather tangible evidence due to the covert nature of such behaviour.